Searching for Truth in “The Truth Project” — Lesson 6: History — Whose Story? 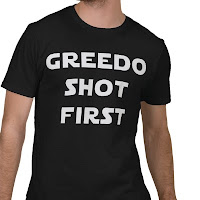 As we moved away from The Truth Project‘s (TTP) focus on the “pernicious lie” of evolution in Lesson 5 to the targeting of “historical revisionism” in Lesson 6, I felt as if the worst was behind me in terms of finding truth in the series.  In a sense, I was correct.  In another sense, I was dreadfully wrong.  As much as I agreed wholeheartedly with most of what Del Tackett had to say regarding the topic of historical revisionism and the importance of the meta-narrative, I couldn’t help but be reminded time and time again how Tackett’s approach to the topic of human evolution nullified the impact of his words.
I can certainly stand arm-in-arm with Tackett against the evil forces of historical revisionists.  There is, he warns, extreme danger and power in the act of historical revisionism.  “If you rewrite the past,” Tackett says, “you can make people believe whatever you want in the present.”  In the context of TTP, Tackett’s warning targets specifically relatively recent attempts in various forms of media to downplay or outright erase the influence of Judeo-Christian culture upon on our founding fathers’ personal belief systems as well as our present-day political system.  Historical revisionism, regardless of how unsavory the past is to one’s sensibilities, is downright criminal.  But isn’t historical revisionism what Tackett attempts to do in Lesson 5?  Rewrite the past of our species?
Historical revisionism isn’t just relegated to the written word, but also to the various scientific disciplines.  While ignoring the fact that TTP finds itself an unwitting ally of the Intelligent Design movement, of which a significant number accept the basic principles of evolutionary theory and common descent, and recognizing that TTP is not a mouthpiece for the young-earth creationist movement, TTP remains guilty of historical revisionism when in comes to human biology, anthropology, archeology, sociology, paleontology, geology, and a host of other -ologies, for all of these academic fields intersect heavily with evolutionary theory.  Once one denies the fact of human evolution from less complex lifeforms and propagates such a worldview, one becomes guilty of attempting to erase the evidence of our aforementioned biological heritage from all of these fields of scientific endeavor, effectively taking credit away from the very unifying principle which has enabled a vast portion of our scientific advancements to come to pass.
One of Lesson 6’s interviewees is Christian author and social critic Dr. Os Guinness.  Guinness muses that Christians have “an abominable view of the past” and wisely notes that “where we’ve come from—the past and history—is the key to who we are and where we are.  And those who don’t know history have no sense of identity and no sense of wisdom as they explore where they’re gonna go.  Without history, we’re lost, both in terms of identity and in terms of wisdom as we go our way forward.”  Well said, Dr. Guinness.  However, I just about snorted Diet 7-Up out my nose as I realized how forcefully Dr. Guinness’ words thrust solidly into the heart of TTP‘s anti-intellectual aversion to evolutionary theory.  Take Dr. Guinness’ quote and replace history with evolutionary history, and you’ll see what I’m talking about.
What Tackett and other anti-evolutionists don’t quite comprehend is that evolutionary theory is, arguably, the foundation for modern scientific advancement in dozens of fields, including medicine, psychology, genetics, etc.  Once you throw evolutionary theory out the window, what do you have?  Either a crippled scientific community, hobbling around attempting to find a more “biblically” acceptable pathway to a workable medical solution, or a cognitively dissonant scientific community that assumes the truth of evolutionary theory with their hands while they shake their heads and close their hearts in disbelief at their own discoveries.
Another concept that Tackett champions is the meta-narrative, the “larger story” in which we find ourselves and in which God plays the primary roles of Creator of the cosmos and Lord of believers’ lives.  Nevertheless, Tackett rejects the much larger story of human history, including our evolutionary descent from extremely humble beginnings, thus removing an important piece of the puzzle that is the “how” of human existence.  “A people who are caught up in their own little story will never be willing to lay themselves down as stepping stones for others,” Tackett instructs.  Amen, Mr. Tackett.  Unfortunately, Tackett’s own nearsightedness truncates the true meta-narrative in favor of one that eliminates most of human history from the very meta-narrative he champions.  He is caught up in a falsehood, a particular “little story” dictated by an uninformed understanding of the first three chapters of Genesis.  As a result, he fails to endorse evolution-based scientific endeavors as “stepping stones” toward the greater health and wealth of human society, condemning the methods and principles by which these things are exclusively obtained.  Although Tackett warns us against having a myopic view of history, Tackett advocates a much larger version of myopia when it comes to human origins.  In essence, Tackett is saying, “Let it be rewritten, let it be done!”  I don’t think so.
Oh, yeah … Han shot first.

451 Responses to Searching for Truth in “The Truth Project” — Lesson 6: History — Whose Story?