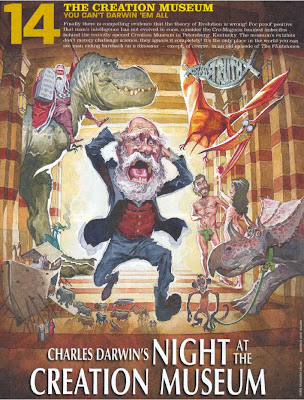 Image courtesy of Mad magazine, via Pharyngula
Trust me. I’m no fan of PZ Meyers. But his review of Answers in Genesis’ Creation Museum, located in Petersberg, Kentucky, is phenomenal (with the exception of some of his atheist ranting, of course, as well as his unsubstantiated charge of racism on the part of AiG).

Here are a few excerpts:

It’s an ongoing theme throughout the “museum” that there are these two views in opposition, and it’s often stated quite unashamedly that the conflict is between God’s word and . . . human reason. It’s also quite clear that human reason is the enemy to Ken Ham and his crew.

[Ken Ham] hurtles along heedlessly pretending that the evidence simply doesn’t exist, so he doesn’t need to argue against it, and it’s enough to back up his claims by quoting Bible verses. I suppose it works well for the gullible attendees, but for those of us looking for some ideas with which to wrestle, the impression left is one of credulous vacuity. It’s an empty “museum,” with no real ideas, no evidence, just a collection of props to illustrate an unquestioned myth. When they do make plain statements that contradict the science, they don’t bother to provide a reason to accept their view over the scientific one — reason is the enemy, you may recall. It’s enough to simply declare that this is GOD’S WORD, therefore it is true. Never mind that it is only one narrow interpretation of their god’s awesomely vague words, that many of their fellow Christians can interpret it differently, or that the evidence of nature (which, presumably, is their god’s creation) says something completely different.

The various exhibits that have gotten a fair amount of press, such as the models of Adam and Eve, the construction of the Ark, the consequences of the Fall, etc., etc., etc., just sit there. There isn’t any evidence for them, other than a few sentences in an old book, so the construction crews in Kentucky just let their imaginations run loose and built improbably scenes out of the fabric of quaint myths. But there they are, solid and visible, and that’s their sole purpose — to solidify Bible scenes in the minds of the faithful.