Q&A with the Evolutionary Creationist 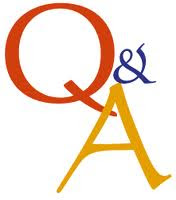 I received an email recently from a good friend of mine who’s just started investigating this whole Evolutionary Creationist bit that I’ve been promoting on this blog for nearly three years now.  His email featured great questions indicative of a genuine seeker, and I felt compelled to answer them as best I could within the limitations of the email format and the time available to me.  He’s probably not the first of my readers to ask those very same questions, and I’m sure some of his questions are ones that my regular readers have asked themselves in regard to what I believe.  Thus, I requested permission to post his questions, and he quickly gave me the green light.  So, here’s the Q&A, warts and all.  (I take personal responsibility for any scientific inaccuracies or over-generalizations.)

One last thing:  Toward the end of this post is an offer to purchase the original questioner the books mentioned in the Q&A.;  Unfortunately, it’s not something I can offer my readers at large.  Money doesn’t grow on phylogenetic trees, ya know.

Yes.  I believe God created the universe for a purpose.  I also believe that God created a universe with all of the necessary natural laws to form itself (e.g., planets, stars, etc.), and that those self-same laws worked to form the first “life” on earth, from which I believe all living things on earth are descended.  Taking God out of the that particular “event” takes nothing away from His majesty, for not only did He set the cosmos in motion, but He also continues to uphold and sustain it by the word of His power.

The irreducible complexity argument (which fails at its most basic level) requires God to tinker with the cosmos merely because the laws He put into effect weren’t sufficient to achieve His purposes.  I understand some feel the need to have God’s hand directly involved in the creation of life, but wouldn’t the creation of the universe itself fulfill the same need?

As for evidence of abiogenesis, the scientific literature is replete with examples (based on lengthy, observed experiments) of how life could have formed on its own.  What’s in question is the exact method by which it did so.  And that is likely an impossible question to answer.  It’s akin to figuring out how a molecule of air made it from one end of a maze to the other in a maze with more than one possible route.

In the end, my choice to believe in abiogenesis is slightly more a scientific choice rather than a philosophical one.  I find it quite plausible.

2.       Where are all the transition forms? Especially if irreducible complexity is negated because the intermediate steps actually served a purpose (wouldn’t they continue to exist?).

Considering the manner by which fossils are formed, no one should expect the geologic column to preserve every so-called “transitional form” for our study.  (I believe ALL fossil specimens and ALL living beings are transitional in nature to one degree or another.)  In fact, even today, the act of fossilization is extremely rare, only occurring in certain environments.  We’re lucky to have the specimens we have.  Highly recommended:  The Bible, Rocks and Time: Geological Evidence for the Age of the Earth

(Davis A. Young and Ralph F. Stearley, both Evangelicals).  I’m half-way through it and it’s absolutely fascinating!

Nevertheless, the fossil record records for us, in chronological order as preserved in the geologic column, a wonderful bounty of “transitional forms” (e.g., fish to amphibians, reptiles to mammals, horses, land-dwelling “whales” to seaborn mammals, etc.).  These fossils serve as “snapshots” of evolutionary change, in much the same way we observe how our children have grown up by looking at their annual school photos.  What’s missing are the in-between months.  Similarly, as a species continues to evolve, you wouldn’t necessary notice the change from generation to generation due to the fact that the changes are, in most cases, small (albeit critical in some cases).  Using the previous example of watching your children grow up, you don’t necessarily notice the day-to-day changes, although you become quite aware of them when viewing photos separated by a certain measure of time.  Highly recommended:  Evolution: What the Fossils Say and Why It Matters

3.       Material I’ve read (decidedly anti-evolution) indicates that even with 4.5 billion-year old earth, there simply isn’t enough time for random mutations to account for the diversity of life.

I used to parrot this argument, but it really isn’t a very good one.  What most people (Christians or otherwise) don’t appreciate is how long a million years really is, especially in terms of reproductive life cycles.  It’s a loooooooooooooong time.  So is a billion years.  There’s more than enough time to account for the diversity of life.  In species that have extremely short life cycles (e.g., bacteria, viruses, fruit flies, etc.), scientists have observed massive amounts of evolutionary change.  Heck, we observe it every flu season as certain populations of viruses meet their timely demise while others are able to evolve and “dodge” the vaccine, requiring ever-new vaccines.  Highly recommended:  Why Evolution Is True

(Jerry Coyne) and The Greatest Show on Earth: The Evidence for Evolution

4.       Is there no teleological argument for God? If everything arose by chance, how do the heavens declare His glory? The psalmist wrote that he was fearfully and wonderfully made, but by who – Father God or Mother Nature?

Supposing God exists, the heavens declare His glory for the very reasons I mentioned in Answer #1:  He set the cosmos in motion, and He continues to uphold and sustain it by the word of His power.  Again, one can’t scientifically prove that.  It is a choice, and one that I make because of my admittedly subjective experience with the being Whom I believe to be the Living God.  Highly recommended:  Finding Darwin’s God: A Scientist’s Search for Common Ground Between God and Evolution

5.       Do you believe in punctuated equilibrium?

To a degree.  I don’t think “punk-eek” applies universally, but rather at certain times and for certain species.  But I recommend you read up on the theory (especially the “common misconceptions” section) before passing judgment on it.  (It’s an easy thing to do if you’re not familiar with the 40,000-foot view.)  It merely suggests that while evolutionary change is always occurring, it makes its most critical advancements in spurts as a population of species undergoes hyper-evolution under just the right geo-environmental conditions.  This is, of course, somewhat misleading, for that self-same “hyper-evolution” still occurs over tens (if not hundreds) of thousands of years.

6.       How does evolution develop a moral code? C. S. Lewis eventually embraced God and Christianity because of the conscience inherent in man – the “moral ought” – which he felt had to have been given to man by someone or something. He believed this was evidence of God. Was conscience actually only a evolutionary product which God merely took advantage of in Lewis’ life?

I think you hit the nail right on the head.  Our spirituality, I believe, is an outgrowth of our physicality, an evolutionary development (for the non-teleologically-inclined) or achievement (for those of us who view life in a teleological manner).  In this view, our moral conscience is truly inherent, but it wasn’t always the case in the evolution of the creaturely branch that led to our species.  Of course, there would have been, at some point, a time when we became morally culpable for our actions.

Personally, I believe that God did not interfere in the affairs of our world until such time as a creature (Homo sapiens, in the case of planet Earth) achieved mental and moral characteristics that mirrored God’s own.  It was because of this very development/achievement that God chose mankind, a creature capable of representing God (i.e., bearing His “image”) on Earth.

Of course, this also leaves open the possibility that, at some point in Earth’s distant future, another species could achieve moral culpability.

Yes.  I believe the statistical odds favor it.  Personally, that’s a very exciting prospect!  (In my new bio-spiritual body, I’d love to take a “star trek” and explore the rest of God’s grand universe.)  A corollary to this belief is the idea that if a morally culpable species should ever arise elsewhere in the universe, then God would also desire to enter into a covenantal relationship with it, entering its social and religious world (much like He did with the Israelites), and expressing His love to them in a manner relevant to their unique culture, possibly by performing another act of Incarnation and dying in a culturally-relevant manner.

That’s it for now. As I stated before, I’m warming up to the idea that Genesis may not be a creation account of the physical universe. Evolution, on the other hand, is a different story.

Highly recommended is this one-two punch:  Begin with Wheaton College’s John Walton and his The Lost World of Genesis One: Ancient Cosmology and the Origins Debate

, and then proceed to Denis Lamoureux’s Evolutionary Creation: A Christian Approach to Evolution

and/or I Love Jesus & I Accept Evolution

(which is really a less-expensive condensation of Evolutionary Creation), both of whom are Evangelicals.

In fact, if you are willing to read any of these books, let me know and I’ll have any (or all!) of them shipped to your house in a matter of days.  My treat.  As well, I think you’d really enjoy The BioLogos Forum website.  Great Q&A, scholarly essays, and contributions by a few good friends of mine.