A friend of mine recently asked, “Homo sapiens has been present [on this earth] for at least 100,000 years and probably longer . . . . So man, who had the mental and physical characteristics [to be considered made in the ‘image of God’], had to wait 98,000 years to hear the truth and be taught ‘the Way.’ For 98,000 years, he was denied truth and free to live in any manner he desired. The concept of a god watching this go on for so long and then, a mere 2000 years ago, [decide] to enlighten man, just seems odd to me. Why not let his creation get the benefit of this wonderful message sooner and not have to wallow in ignorance? I know you can’t speak for God, but it’s this aspect of theistic [evolution which] I am questioning.”

Good question. And it recalled to mind an article by Dinesh D’Souza that I read recently. Although D’Souza initially ignored this question, posed in similar fashion by atheist Christopher Hitchens during their debate, he revisits the question after considerable thought and research:

Here is the thrust of Hitchens’ point: God seems to have been napping for 98 percent of human history, finally getting his act together only for the most recent 2 percent? What kind of a bizarre God acts like this? . . . The Population Reference Bureau estimates that the number of people who have ever been born is approximately 105 billion. Of this number, about 2 percent were born in the 100,000 years before Christ came to earth. “So in a sense,” [Erik] Kreps [of the Survey Research Center of the University of Michigan’s Institute for Social Research] notes, “God’s timing couldn’t have been more perfect. If He’d come earlier in human history, how reliable would the records of his relationship with man be? But He showed up just before the exponential explosion in the world’s population, so even though 98 percent of humanity’s timeline had passed, only 2 percent of humanity had previously been born, so 98 percent of us have walked the earth since the Redemption.”

D’Souza goes on to discuss some other issues connected with this concept, such as possible reasons behind the apparent explosion of civilization approximately 6,000 years ago. Good stuff. Speculative, but still good. 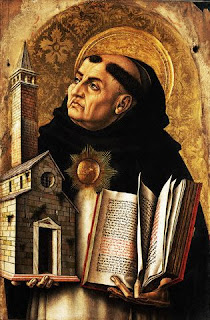 Some there are who presume so far on their wits that they think themselves capable of measuring the whole nature of things by their intellect, in that they esteem all things true which they see, and false which they see not. Accordingly, in order that man’s mind might be freed from this presumption, and seek the truth humbly, it was necessary that certain things far surpassing his intellect should be proposed to man by God.

[Depiction of St. Thomas Aquinas from the Demidoff Altarpiece by Carlo Crivelli]

If you are an iTunes user, be sure to download Denis O. Lamoureux’s presentation on “Evolutionary Creation: A Christian Approach to Evolution” from the 63rd Annual Meeting of the American Scientific Affiliation! Non-iTunes users can also download the half-hour presentation here.

And while I’m on the topic of Lamoureux’s presentation, I can’t stress enough the importance of purchasing and reading his book. This tome has the potential of shaking the Evangelical Church out of its pseudo-scientific morass and putting it on a solid course toward integrating biblical inerrancy and the findings of modern science. As such, I’m putting off blogging on the theological ramifications of evolutionary creationism until I’ve finished his book and digested it. It’s that good.

“Beyond the Firmament” Hits #4 on Amazon.com!

Congratulations are in order for Gordon Glover! His outstanding book, Beyond the Firmament: Understanding Science and the Theology of Creation—now in its second pressing!—hit #4 on Amazon.com’s list of books dealing with the subject of Creationism during the week of 13 August!

You can keep an eye on Amazon’s top Creationism sellers here. Buy several copies for family and friends and help propel Gordon’s book to the top of the list! 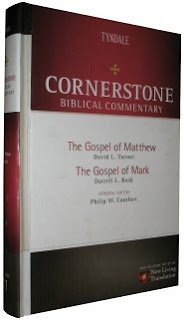 If you’re a user of the Logos Bible Software, which I highly recommend to any serious student of the Bible, you have a unique opportunity to grab the Matthew/Mark volume for free! For a limited time (until the pre-pub ships) you can head over to product page and download it to your Libronix digital library absolutely free of charge. Use coupon code CORNERSTONE during checkout.

You Must Unlearn What You Have Learned 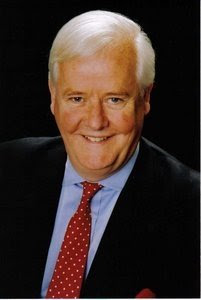 It is ironic that, although fundamentalists are implacably opposed to liberalism, their extreme reaction shows the same weakness. They, too, stress the leap of faith and make irrationality almost a principle, dismissing the serious questions of seeking modern men as intellectual smoke-screens or diversions to conceal deeper personal problems. All this masks a desperate intellectual insecurity, barely disguised by the surrounding hedge of taboos to preserve purity. The strident intolerance of much guilt-driven evangelism betrays the same insecurity. In these circles, much that is taught has to be unlearned in the wider school of life, and it is not surprising that universities are littered with dropouts from such groups. Their non-rational, subjective faith is cruelly punctured by varsity-level questions, and many manage to survive only by resorting to a severely schizophrenic faith which they hold to be true religiously but not intellectually, historically, or scientifically.

Creation and Evolution in the Blogosphere

Here are a few interesting blog posts, websites, online books, etc., that I’ve come across in the last several days:

The Infallible God in Fallible Flesh 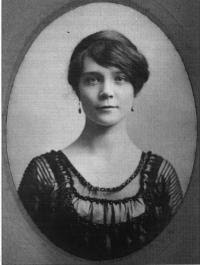 For whatever reason God chose to make man as he is—limited and suffering and subject to sorrows and death—He had the honesty and courage to take His own medicine. Whatever game He is playing with His creation, He has kept His own rules and played fair. He can exact nothing from man that He has not exacted from Himself. He has Himself gone through the whole of human experience, from the trivial irritations of family life and the cramping restrictions of hard work and lack of money to the worst horrors of pain and humiliation, defeat, despair, and death. When He was a man, He played the man. He was born in poverty and died in disgrace and thought it was well worthwhile.
— Dorothy L. Sayers (1893-1957), Christian Letters to a Post-Christian World: A Selection of Essays [1969]

Putting the Cart Before the Eohippus?

Most evangelicals believe that if a passage of the Bible seems unclear in its meaning, it should be interpreted in the light of Scripture “as a whole.” But what does “Scripture as a whole” mean? In practice, if not theory, it means the working systematic theology of the interpreter, or of his own theological tradition. An evangelical . . . would not hold to that tradition unless he believed that it did represent the wholeness of the biblical witness. Nevertheless, if this state of affairs has been correctly described, he is now in a serious difficulty. For if the Bible must always accord with a theology that has already been accepted, how can the truth of a biblical passage ever confront him afresh with an unfavorable judgment?

The Slippery Slope of Evolutionary Creationism