I just finished reading Francisco J. Ayala‘s Darwin’s Gift to Science and Religion and came across this quote from St. Augustine‘s [AD 354-430] The Literal Meaning of Genesis. I find it extremely profound and relevant to the modern-day creation/evolution debate:

Usually, even a non-Christian knows something about the earth, the heavens, and the other elements of this world, about the motion and orbit of the stars and even their size and relative positions, about the predictable eclipses of the sun and moon, the cycles of the years and the seasons, about the kinds of animals, shrubs, stones, and so forth, and this knowledge he holds to as being certain from reason and experience.

Now, it is a disgraceful and dangerous thing for an infidel to hear a Christian, presumably giving the meaning of Holy Scripture, talking nonsense on these topics; and we should take all means to prevent such an embarrassing situation, in which people show up vast ignorance in a Christian and laugh it to scorn. The shame is not so much that an ignorant individual is derided, but that people outside the household of the faith think our sacred writer held such opinions, and, to the great loss of those for whose salvation we toil, the writers of our Scripture are criticized and rejected as unlearned men.

If they find a Christian mistaken in a field which they themselves know well and hear him maintaining his foolish opinions about our books, how are they going to believe those books in matters concerning the resurrection of the dead, the hope of eternal life, and the kingdom of heaven, when they think their pages are full of falsehoods on facts which they themselves have learnt from experience and the light of reason?

Reckless and incompetent expounders of Holy Scripture bring untold trouble and sorrow on their wiser brethren when they are caught in one of their mischievous false opinions and are taken to task by those who are not bound by the authority of our sacred books. For then, to defend their utterly foolish and obviously untrue statements, they will try to call upon Holy Scripture for proof and even recite from memory many passages which they think support their position, although they understand neither what they say nor the things about which they make assertions. 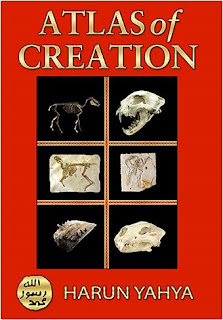 From the FOX News article:

The next major battle over evolutionary theory is likely to occur not in the United States but in the Islamic world or in countries with large Muslim populations because of rising levels of education and Internet access there, as well as the rising importance of biology, a scientist now says.

As with Christians and Jews, there is no consensus or “official” opinion on evolution among Muslims.

However, some of them say that the theory is a cultural threat that acts as a force in favor of atheism, says Hampshire College’s Salman Hameed in an essay in the Dec. 12 issue of the journal Science. This is the same beef that some Christians have with evolution.

A general respect for science in the Islamic world means scientists have an opportunity to counter anti-evolution efforts, such as the Atlas of Creation, a glossy 850-page color volume produced by Muslim creationist Adnan Oktar who goes by the name of Harun Yahya.

Numerous university scientists and members of the media received copies of this book as an unsolicited gift in 2007.

Be sure to read this excellent interview with Denis O. Lamoureux, author of Evolutionary Creationism.

Now, back to working on my review of chapter 3 of Lamoureux’s book …

Why the Debate Over Creationism Matters

Undeception‘s Steve Douglas takes a profound look at why the debate over creationism and evolution matters to the Church:

1) A faith that demands the rejection of mainstream science in order to legitimize its teachings is automatically, unavoidably suspected to be out of touch and irrelevant.

2) Maintaining [special] creationism entails at least the implication of conspiracy and/or bad motives on the part of both unbelieving and believing scientists.

3) Crucial for a faithful, accurate interpretation of Scripture is learning to read [Scripture] as it was intended rather than holding it captive to one’s own presuppositions about it.

For his exposition of these points, head over to his blog for what’s already proven to be an interesting discussion …