Arguments I Think Creationists from Answers in Genesis (AiG) SHOULD Use 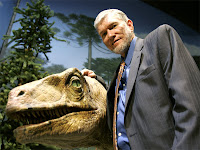 As every Internet surfer does on occasion, you start out researching one thing and end up in a completely unexpected location. This time, I ended up at Answers in Genesis’ (Aig) webpage titled “Arguments we think creationists should NOT use.” (Don’t ask how I got from searching birth records of my relatives to searching for the birth record of our planet.) Under the heading “What arguments are doubtful, hence inadvisable, to use?” is the argument that reads: “There is amazing modern scientific insight in the Bible.” Oddly enough, I completely agree with their advisement! Here’s AiG’s response to this argument (the most important part of which I’ve bolded in red):

We should interpret the Bible as the author originally intended, and as the intended readership would have understood it. Therefore we should be cautious in reading modern science into passages if the original readers would not have seen it. This applies especially to poetic books like Job and Psalms. For example, Job’s readers would not have understood Job 38:31 to be teaching anything about the gravitational potential energy of Orion and Pleiades. Rather, the original readers would have seen it as a poetic illustration of God’s might—that God, unlike Job, could create the Pleiades in a tightly-knit cluster, which is what it looks like, while God created Orion as a well spread-out constellation, again something well beyond Job’s ability. Similarly, Job 38:14 is not advanced scientific insight into the earth’s rotation, because the earth is not being compared to the turning seal, but to the clay turning from one shape into another under the seal.