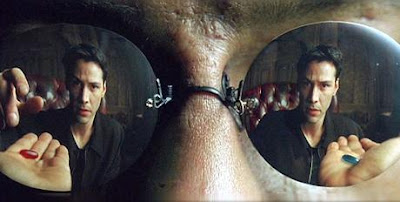 I took the “red pill.” And the rabbit hole goes quite deep. For the first nine months of my scientifico-theological journey, I was much more focused on the validity of the scientific and theological case for an ancient universe. In all honesty, it wasn’t much of a leap of faith to accept these things. But there was still that nasty business about evolution.
In the interest of full disclosure, I fancy myself much more competent as a self-studied lay theologian than I do as a self-studied lay scientist. The extent of my formal scientific training is high school-level biology and chemistry, and college-level physics. Sadly, my previous young-earth creationist loyalties instilled in me a deep distrust of the modern, scientific establishment and, up until about 9 months ago, I didn’t bother to catch up on the latest and greatest. So, who am I to judge the scientific merit of the theory of evolution? Good question. I don’t have much of an answer other than to say that I’ve been careful to read literature from a variety of viewpoints, including the ID perspective, and I’m a quick study.

My primary goal in evaluating the scientific merits of evolution was to understand the theory (or theories) underlying biological evolutionary change. I was shocked to discover how poorly I understood the mechanisms of evolution. As Providence would have it, there were a number of outstanding resources on the Internet that assisted me in this endeavor, including:

As both theists and evolutionists, I valued highly their expertise and perspective. Although Collins’ Lewis-influenced Christian apologetics constitute a significant portion of his book, it was the scientific evidence for human evolution that intrigued me the most. If that portion of Collins’ book whetted your appetite, then Fairbanks’ book is a feast for the scientific mind! Both present evidence for mankind’s biological heritage in a way that is both awe-inspiring as well as utterly convincing. The genetic evidence of mankind’s “scandalous” past must be convincing if some of those who jumpstarted the ID movement in the mid-90s, such as Lehigh University Professor Michael Behe, have finally come to accept mankind’s common descent from lower lifeforms (see Behe’s The Edge of Evolution: The Search for the Limits of Darwinism). Despite this concession, Behe continues to preach tenaciously his theory of “irreducible complexity,” a theory which the mainstream scientific community—even more tenaciously—proves with additional research to be nothing more than philosophical lint struggling to stay attached to the well-fitted suit that is the God-ordained evolutionary process, designed from before the first moments of the Big Bang to bring about all that is—without additional tinkering. (To understand how bankrupt “irreducible complexity” is, see “Irreducible Complexity and Michael Behe: Do Biochemical Machines Show Intelligent Design?”)

Also of considerable influence was Mark Isaak’s The Counter-Creationism Handbook, based upon his outstanding Internet-based “Index to Creationist Claims.” (Just be sure to separate the wheat [i.e., the scientific arguments] from the chaff [i.e., the anti-Christian arguments]. One may also want to read Creation Wiki’s response to Isaak’s counter-creation arguments.)

The rabbit hole is grandiously deep. And it inspires in me more awe for God’s handiwork than any creation de novo or ex nihilo could ever inspire. It’s counter-intuitive to be sure. At the same time, it’s a pleasantly surprising endgame. I would never have suspected that my faith would be enriched by accepting the truth of biological evolution and common descent. In my search for answers, I was also shocked to find additional evangelical scientists who had no issues with accepting both what University of Alberta’s Denis O. Lamoureux terms the Book of God’s Word and the Book of God’s Works.

Of course, if you’re a committed theist as I am, there will certainly be a struggle involved in accepting the scientific evidence for biological evolution and the common descent of man. There is much to consider, especially as it concerns such theological concepts as biblical inerrancy (including the inspiration of Scripture and the historicity of the opening chapters of Genesis), the origin of sin, the problem of evil, and what lies ahead in mankind’s future. It is to the discussion of these topics that this blog now turns …

42 Responses to Following the White Rabbit