From So Simple a Beginning … 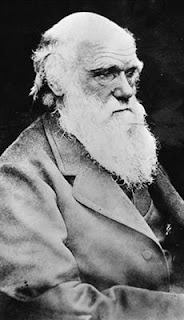 As the 200th anniversary of Darwin’s birth—and the 150th anniversary of the publication of On the Origin of Species—approached, I wasn’t sure exactly how to celebrate or observe it. I knew that I wanted to post a little tribute to Darwin, but I wanted to do something a little more substantial. So earlier this week, I ordered From So Simple a Beginning: The Four Great Books of Charles Darwin (ed. Edward O. Wilson), a single, hardcover volume (with slipcase!) collecting The Voyage of the Beagle (1839), On the Origin of Species (1859), The Descent of Man (1871), and The Expression of the Emotions in Man and Animals (1872). I felt that I needed to read Darwin’s works firsthand and not settle for someone else’s opinion (misinformed or not) of what Darwin wrote.

As it is with every individual who has contributed immensely to the progress of human civilization, no one knew quite what lay in store for the world the moment Darwin’s tiny body entered the world after 40 weeks of being knit in the womb via an amazing evolutionary process. Just as no one knew young Abe Lincoln would, approximately 54 years later, emancipate an entire community of American slaves through the issuance of two executive orders in 1862 and 1863, no one knew that little Charles Darwin would develop a scientific theory and publish a monumental work that would free mankind from the shackles of scientific ignorance.

Happy birthday, Chuck. I look forward to reading your stuff.

PS — The book arrived on your birthday. Coincidence? I think not.

6 Responses to From So Simple a Beginning …