I’m Going to Get Expelled! 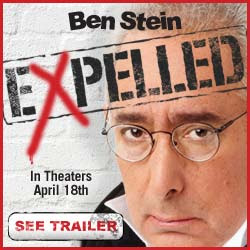 This afternoon, I won two tickets to see Ben Stein’s propaganda tour-de-force Expelled: No Intelligence Allowed, the much-touted response to atheistic naturalism by the Intelligent Design community. (Of course, the ID community refuses—out of fear, I might add—to acknowledge that Darwinism and/or naturalistic evolution isn’t inherently atheistic, but I digress …) So it is that, the weekend of 18 April, I’ll be traveling up to a theater in Salinas (about 25 minutes from Monterey) to attend the show, after which I’ll jot down my thoughts on the movie and post them here. If you’ve just won two tickets to the movie and you believe that evolution is scientific fact (and not just a theory), would you merely walk in the door, watch the show, and walk out again? Or would you attempt to present your viewpoint to any in the audience willing to listen? If so, how?

4 Responses to I’m Going to Get Expelled!