“Flunked Out” — A Review of Ben Stein’s “Expelled” 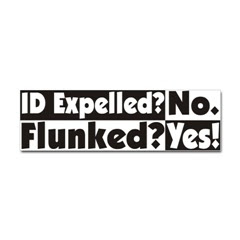 If I really wanted to let my sarcastic side loose, I wouldn’t have added any words to my review of Ben Stein’s propaganda tour-de-force Expelled: No Intelligence Allowed beyond those present in this post’s title. But I’m not feeling so sarcastic today. In fact, I’m feeling quite angry.

As I mentioned in an earlier post, I won two tickets to see Expelled. Being new to the area, I really didn’t know who to take. By chance, I met JP, whose wife attends my wife’s local bible study. Being the intelligent fellow JP seemed to be, I figured seeing Expelled would be right up his alley. Thankfully, I was right, and we had an excellent conversation on the merits and boundaries of both science and religion during yesterday’s drive home from Salinas, where we viewed the movie. (Thank God it wasn’t an IMAX. The director of photography loves closeups. Remember the “Seinfeld” episode about the mole?)

We both admitted that the movie was an extremely powerful piece of propaganda, regardless of the truthfulness or falsity of its claims. The liberal use of pre-color television, news, and motion picture clips were ingeniously interspersed throughout the movie in order to reinforce the charges that Expelled made, namely: (1) people from various industries have lost their jobs and sufferered humiliating ruination all because they “mentioned” Intelligent Design in the workplace, and (2) Darwinism is the beginning of a slippery slope into atheism and a philosophy of life that not only allows but encourages abortion, euthanasia, eugenics, and other moral monstrosities, much like those (if not identical to) crimes against humanity conducted by mid-20th century Nazism and communism.

In regard to the first charge, I was naturally skeptical. One of my favorite rock bands of the 90s was Extreme, founded by former Van Halen lead singer Gary Cherone. As the band progressed through their four studio albums, Cherone’s Christian faith made its presence known increasingly. Their third album was titled III Sides to Every Story (1992), which was was divided into three parts: “Yours,” “Mine,” and “The Truth,” the last of which contained some of the most gorgeous statements of Davidic pleading and faith I’ve heard in modern music. But I digress. My point is that Ben Stein, et al, were not telling the whole story regarding the alleged dismissals of those Stein interviewed, and it appears that the interviewees took great pains to paint pictures of a vast atheistic conspiracy to target Christian scientists or teachers who believe in God by leaving out (conveniently, I might add) details that would change the story from “Mine” to “The Truth.” ExpelledExposed.com provides more illuminating details on each of the six “victims.”

Ironically, Expelled interviews two Christian theologians, Oxford’s Alister McGrath and Cambridge’s John Polkinghorne, both of whom haven’t been “expelled” from their respective institutions for being strong believers in the Judeo-Christian God. Thus, it stands to reason that the truth behind the dismissals of Expelled‘s six case studies may very well be for reasons other than the mere belief in an Intelligent Designer. On the other hand, if they were in fact dismissed for pursuing scientific proof of Intelligent Design in their work (and/or not producing enough grants, published literature, etc.), I can understand why they should lose their jobs: Intelligent Design is not science, and no self-respecting scientific or academic institution should have to allow psuedo-science into the classroom and/or laboratory. In the words of the American Astronomical Society,

In recent years, advocates of “Intelligent Design” have proposed teaching “Intelligent Design” as a valid alternative theory for the history of life. Although scientists have vigorous discussions on interpretations for some aspects of evolution, there is widespread agreement on the power of natural selection to shape the emergence of new species. Even if there were no such agreement, “Intelligent Design” fails to meet the basic definition of a scientific idea: its proponents do not present testable hypotheses and do not provide evidence for their views that can be verified or duplicated by subsequent researchers.

Has the Intelligent Design movement produced anything of scientific note? Anyone? Anyone?

The movie also makes the claim that scientists’ attempts to discover a natural explanation for the origin of life on earth have come to a complete standstill since the failed experiments of the 1950s in which scientists applied electricity to a primordial soup in hopes that life would spontaneously arise. This can’t be further from the truth, as scientists have recently made great leaps toward understanding what environmental conditions may have served as a cataylst for the origin of life. (No Lightning Allowed. Sorry, couldn’t resist.)

Also disturbing was Stein’s “guilt by association” sleight-of-hand, which linked Darwinism’s allegedly logical ends and the horrific Holocaust perpetrated by Hitler’s Nazi regime. Stein even quotes Darwin at length while touring the remnants of Germany’s concentration camps, creating a powerful indictment of a brilliant man who harbored no such ill will toward any of his fellow man. But Stein’s Darwin quote is selective, leaving out entire sentences in order to make Darwin sound like a card-carrying member of the Aryan race. To the contrary, if one were to read the passage in context and in full, it turns out that Darwin extolls the nobleness of the human race (having risen above its animal instincts) and depicts the elimination of the weak and helpless (like those conducted by Hitler’s goon squads) as a supremely selfish act and an “overwhelming present evil.” Shame on you, Ben Stein. Back of the line! No primordial soup for you!

And poor Richard Dawkins. If he only knew for what his interview was really intended. As much as I disagree with Dawkins’ philosophy, I feel sorry for him and others (like PZ Meyers) who were hoodwinked into thinking their interviews were being filmed for an objective documentary. Does anyone know if Alister McGrath and John Polkinghorne, both theistic evolutionists, knew that their interviews would be featured in Expelled? From the quotes used, I doubt anyone in the audience would have suspected that they are theistic evolutionists who, as far as I know, don’t accept the precepts of the Intelligent Design movement.

You’d think that Expelled‘s deliberate misrepresentation of the facts, both in terms of movie production and presentation of the scientific evidence, would make me angry. Not so much. I wouldn’t expect anything more from a fringe establishment trying to masquerade their faith as science. With such an entrenched paradigm, their actions don’t surprise me. So what is making me angry? Honestly, it’s the fact that one year ago I would have fallen for Stein’s presentation—hook, line, and sinker. I’m also angry at how easily Christians fall for half-truths and outright lies. I’m angry at how often we Christians check our brains at the door and are perfectly willing to serve as messenger boys for the most outrageous urban legends, folk sciences, doctrines, and just plain idiotic belief systems. I’m angry at Christianity’s penchant for dismissing the claims of biological and astronomical science despite the voluminous amount of evidence in favor of evolution.

Have you seen Expelled? What are your thoughts?