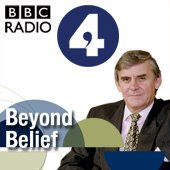 Just before Thanksgiving, I was contacted by a BBC Radio 4 researcher looking to include me as a guest on their Sony Award-winning Beyond Belief radio programme. Of interest to them was my blog and my personal journey from young-earth creationism to becoming a supporter of evolutionary theory (commonly referred to as Darwinism in the UK). After a trans-Atlantic 40-minute pre-interview over the phone with one of BBC Radio 4’s researchers, I was informed that they wanted to get me into my local NPR studio and conduct a real interview with Beyond Belief‘s host, Ernie Rea.
Over the course of several weeks, my particular role in the episode “Darwin and Religion” began to take shape. As usual, the show would feature three panelists “who discuss how their particular religious tradition affects their values and way of looking at the world, often revealing hidden and contradictory truths.” In this particular episode, the panelists would be Alexandra Wright, Senior Rabbi of London’s Liberal Jewish Synagogue; Dr. Alister E. McGrath, former Professor of Historical Theology at Oxford University and current Chair of Theology, Ministry and Education at King’s College London; and Dr. Usama Hassan, Senior Lecturer at Middlesex University and part-time imam—each of whom would share their thoughts on their respective scriptures’ creation narratives and, upon listening to excerpts from my 20-minute interview (edited down to about 4 minutes in order to fit the show’s half-hour time slot), would discuss certain aspects of my journey as well as why adherents of their respective faiths feel threatened by the theory Darwin first published 150 years ago.

After a few technical difficulties, the interview went without a hitch. As you can imagine, a lot can be discussed in a 20-minute period and it was a challenge to reduce lengthy explanations into brief soundbytes. Moreover, I was curious as to which portions of the interview they would end up utilizing. Well, the episode aired this morning and I’m happy to report that it was an excellent discussion all around! (It’s available for download directly from BBC Radio 4’s website or as an iTunes podcast.) I admit that I listened to my portion of the programme first (13:23 to 17:13). I certainly didn’t want to publicize this radio appearance before it aired only to sound the fool. Overall, I was pleased with the excerpts themselves. (None of my views were misrepresented, although Dr. Hassan took exception to what he thought was my belief that young-earth creationism is “purely an American phenomena.” If you listen carefully, I never said that nor implied that.)

Of course, it was inevitable that much would be left out as a part of the editing process, in particular, the questions and answers regarding my interpretation of Genesis 1. However, that particular edit didn’t matter so much, as significant portions of my own understanding of the Genesis creation narrative was expressed during the show’s first half by both Rabbi Wright and Dr. McGrath. Another significant portion of the interview that was edited out was my answer to the question, “If you don’t observe scientific evidence for God, on what do you base your theism?” For those who want to know, it was essentially this: “Although I recognize ‘intelligent design’ in what I observe, I do not expect to find scientific evidence of God’s existence; my belief in God is, first and foremost, based on my encounter with a Jewish carpenter named Jesus of Nazareth, who has transformed my life. His presence in and influence on my life is so evident to me that to reject the existence and influence of Christ would be akin to denying the existence of my own wife and children.”

Regardless of the inevitable edits that come with working in this particular medium, I am extremely grateful that BBC Radio 4 took an interest in my journey and I want to thank BBC, host Ernie Rae, and researcher Elizabeth Hunt for allowing me to participate in this particular episode.