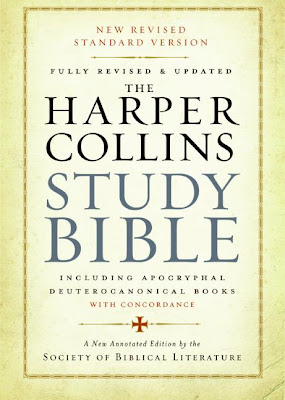 Recently, at Borders Bookstore, I browsed the “fully revised and updated” Harper Collins Study Bible and was ecstatic to read the below excerpt from its introduction to Genesis, written by Ronald Hendel, Professor of Hebrew Bible at UC Berkeley and author of Remembering Abraham: Culture, Memory, and History in the Hebrew Bible (2005).

Although I had the first edition of the HCSB (not the Holman Christian Standard Bible!) at home, I hadn’t really used it much and certainly never intended to profit from its “liberal” perspective found in the introductions and notes (which are, in actuality, superb). In all honestly, I only purchased it a decade ago in order to have a New Revised Standard Version (NRSV) of the Bible as well as version that possessed the entire deuterocanon, including those books utilized by the Greek Orthodox Church in addition to the Roman Catholic Church. When I arrived home, I scoured the introduction of the first edition, looking for and fully intending to post the excerpt. It was nowhere to be found. “Fully revised and updated,” indeed! So I bought it. (What to do with my first edition?)

But I digress. Here’s the excerpt that screamed “post me!” (emphasis mine):

Genesis is not a scientific or historical textbook in the modern sense. Rather, it is a narration of ancient Israel’s traditions and concepts of the past—a mixture of myths and legends, cultural memories, revisions of traditions, and literary brilliance. It is a complex portrait of the past that encodes the values of biblical religion and creates a rich array of perspectives on the world.

There are authentic historical memories in the book, but most of the historical details reflect the period when Israel was an established nation. The older memories include the rise of civilization in the land of Sumer (10.8-12; 11.1-9), the region of Haran as an ancient tribal homeland (12.4; 24; 27.43), Semitic rulers and officials in Egypt (ch. 41), and the worship of the high god named El in pre-Israelite times (17.1). These and other old memories are mingled with more recent memories, such as relations with Israel’s neighbors, including Aram, Philistia, Edom, Ammon, and Moab, which arose at roughly the same time as Israel. The portrayal of the natural world in Genesis also belongs to the worldview of its time—a geocentric universe with light and the earth created before the sun, and with the stars, sun, and moon attached to the surface of the dome of heaven (ch. 1); the first woman fashioned from the first man’s rib (2.21-22); the rainbow as God’s huge weapon set in the clouds (9.13); and the desolate landscape of the Dead Sea (including the pillar that was once Lot’s wife) as the result of ancient transgressions (ch. 19). These and other details reflect ancient lore about life, the earth, and the universe.

It is sometimes unfair to note the scientific inadequacies of Genesis, since it was not written to be a work of modern science. We need to learn to read Genesis as a book that speaks strongly to modern readers, but we need to read it on its terms, recognize its ancient voice, and not superimpose on it our own. It is a book of memories—of marvels and miracles, imperfect saints and holy sinners, a beneficent and often inscrutable God, and promises that bind the past to the present and the future. It tells us where we came from, not in the sense that the book is historically accurate, but in the sense that the book itself is our historical root. (p. 4)

One Response to Science, History, and Genesis