Searching for Truth in “The Truth Project” — Lesson 1: Veritology — What Is Truth? 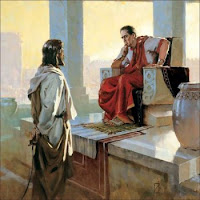 In the first The Truth Project (hereafter, TTP) session, Dr. Del Tackett asked the question, “What is truth?”  Under my breath, I whispered, “An accurate understanding of reality.”  Ten minutes later, after a montage of various definitions from a rotating cast of interviewees, Dr. Tackett revealed, using Webster’s 1828 definition, what he believed to be the correct answer:  “Conforming to fact or reality.”  It was then that I knew Dr. Tackett had just painted himself into a corner.  While I wholeheartedly agree with Dr. Tackett’s assessment of what Jesus’ mission was (“to testify to the truth”; cf. John 18:37) as well as the definition of truth (“conforming to fact or reality”), I found myself, time and time again, calling him out for obscuring the very thing which he attempts to defend in TTP.

One method Dr. Tackett used (consciously or unconsciously only God knows) to obscure the truth from his audience was prefacing much of what he said with the phrase “Most scholars believe …”  To be sure, Dr. Tackett made a number of points, theological or otherwise, with which I agreed.  However, more often than not, the phrase was, when compared to the much larger body of Christian theology, a demonstrably false statement.  It may be an accurate statement amongst those who share Dr. Tackett’s particular theology, which is decidedly not “most scholars,” but his all-too-casual use of the phrase only served to ruin his credibility in my eyes.  When one is executing a “truth project,” I’d venture to say that it’s best not to say things like that.

At the end of the session, I asked the small group, “Why do you believe the Bible is true?”  One individual, formally trained in theology, was taken aback by the question and laughed aloud, “Because the Bible says it’s the Word of God!”  I looked at him and said, “That proves absolutely nothing.  The Book of Mormon makes the same claim for itself.  So does the Qur’an, even more explicitly than the Bible does.”  (I almost added, “Don’t make the Bible a self-licking ice cream cone,” but I thought better of it.)

I followed up with a challenge for everyone to really reflect and think about why they believe the Bible is true.  In other words, how can it be demonstrated to be true?  Are there objective criteria by which we can measure the truthfulness of the Scriptures?  What if, in the process of using these objective criteria, we discover that the Bible contains scientific or historical error?  Should we be suspect of the entire Bible’s veracity, as most Evangelicals claim?  For the sake of argument, let’s assume there is a single, solitary historical inaccuracy in the Bible.  Does that error, then, invalidate the accuracy of the rest of Scripture?  Is the entire thing to be rejected and thrown out based on a single wrong date?  A wrong census number?  A wrong name?  My answer was, of course not.  Others in the group weren’t too keen on that answer.

When I first jotted down these observations on Facebook, one friend of mine, more thoughtful than the “because the Bible says so” individual, used a certain line of logic to prove the truth of the Bible, namely apologist Norman Geisler’s “The 12 Points That Show Christianity Is True”:

Does anyone else see what’s wrong with this list?  I have no problems with points 1 and 2.  However, I can’t help but be skeptical about the use of point 3 in this line of logic.  It’s quite presumptive, no?  Or is there some scientific proof of God’s existence of which I’m unaware?  Don’t misunderstand me:  I am a theist, and a Christian at that.  But you won’t catch me using the “fact” of God’s existence as a linchpin in any argument, especially with skeptics or atheists.

There are other weak links within these 12 points that require one to make certain assumptions; for example, point 6 (the New Testament is historically reliable).  Unfortunately, accuracy in the recording of certain historical facts (e.g., that Herod was king during the birth of Jesus) says nothing about whether the acts of Jesus really occurred.  In fact, a document can certainly appear to be securely grounded in history, giving the illusion of historicity; just think of modern works of historical fiction that place a completely untrue account within the wrappings of a genuine place and time.  (Even the Epic of Gilgamesh, the Babylonian version of Noah’s Flood, rings “truer” in its conversations and in its descriptions of the ark’s construction than does the biblical account.)  Don’t get me wrong:  I believe that the Gospel accounts are reliable testimonies to the words and acts of Jesus Christ, but there is, in the end, no proof of Jesus’ acts that can be examined under a microscope.  Even the resurrection of Jesus, which I believe to have occurred, cannot be definitively proven.  They are, like all historical events, trusted and assumed to have occurred based on the weight of certain lines of evidence, not “proofs.”

Countering my challenge, a friend of mine on Facebook asked me, “Why do you believe the Bible is true?  [Answer the question] as if it were being asked of you by God himself.”  Honestly, I can’t answer that question because, in my case, the line of questioning is wrong.  For one thing, I don’t believe the Bible is without error.  Point in fact: the Bible possesses and declares an ancient Near Eastern conception of the physical cosmos and how it came into being.  In fact, the Bible is replete with examples of its three-tiered cosmos paradigm in both the Old and New Testaments.  Most Christians don’t even realize it.  Why?  Because their heliocentric paradigm, informed by the findings of modern science, was foisted upon them prior to a serious reading of the Scriptures.  As a result, what they read as phenomenological or poetic language was, to the ancient Hebrews, a scientific depiction of reality!

But I digress.  To me, the Gospel accounts are convincing enough that I believe them to be historically trustworthy.  In concert with my (admittedly subjective) experiences with the living Word and the Holy Spirit, I believe that the New Testament can be relied upon to accurately portray who and what Jesus is claimed to be by those who encountered him.  I don’t require an inerrant document to convince me of who Jesus is and what he did.  Reliable human testimony should be enough to convince, just as reliable human testimony is used every day in our court systems to convince juries of the truth.  Just as was done throughout the early Church, which did not possess any New Testament writings for several decades following Jesus’ ascension.

My final words to the small group were that I hoped each individual would dig deeper into the question of what the foundation of his or her faith really is.  If his faith is based on fiction or faulty reasoning, that is a serious problem.  She may have arrived at the correct destination, but only a fool would walk 24,901.55 miles to reach a goal that was, in truth, one step behind her.

16 Responses to Searching for Truth in “The Truth Project” — Lesson 1: Veritology — What Is Truth?