Searching for Truth in “The Truth Project” — Lesson 3: Anthropology — Who Is Man? 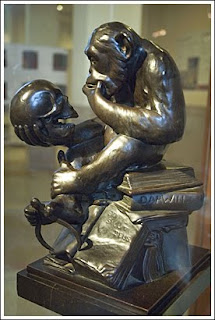 Philosophizing Monkey (1893) by Hugo Reinhold
The Truth Project’s third lesson is a mixed bag, full of both good and bad theology, cutting philosophical insight, and a plethora of false dichotomies.  It had me both cheering from the couch and throwing mental tomatoes at the screen.  Sometimes even within the same talking point.

Tackett begins this particular session by announcing, “The answer to the question ‘What is man?’ is not simple.”  Man has existed, Tackett explains, in a number of modes, all of which can be readily drawn out of Scripture and thus constitute the “good theology” that I mentioned previously.  Mode #1 is a state of innocence (although I’m not sure how Tackett exegeted man’s state of innocence from Gen 1:27) and mode #2 is our post-Edenic, fallen state (Rom 5:12).  In this state, humanity becomes an odd mixture of “imago dei” (Latin for “image of God”) and a sinful nature (Gal 5:16-17).  Tackett divides mode #2 further into mode #2a, the state of being unsaved and destined for hell (Rev 20:15).  Lastly, there is mode #3, the state of being saved and redeemed, destined to eternal life and eventually glorified, which is mode #3a (Rev 5:9).

Honestly, I have no problem speaking in those terms.  As a Christian, I find that they are biblical terms and the theology couched in those terms is good and true.  However, I admit to finding myself thinking beyond those terms to the soteriological reality conveyed by the anthropologically incorrect proto-history that is Genesis 2-3.  Over the course of the last year, I have come to recognize that the story of Adam and Eve is not an historical account of humanity’s transition from innocence to a fallen state.  Rather, the story was written with an etiological purpose in mind.  Using the genre of myth, which has profound explanatory power, the writer(s) provided the Hebrew people with an apologetic for why man’s nature is sinful.  The sinful state of man is recognized, the question “Why are we the way we are?” is asked, and the cause behind our condition is explained in terms that had meaning for them—terms and meanings that are typically lost on 21st-century Americans by virtue of the cultural chasm that exists between civilizations separated by thousands of years and miles.  Although not historical, I believe the story of Adam and Eve still wields considerable theological power and, in a sense, speaks to each of us individually.  We all are born in a state of relative innocence and, at the same time, have within ourselves the “curse” of our evolutionary ancestors.  Our selfish inclinations and our instinct for self-preservation served us well in the battle for survival in millennia past, yet they continue to rear their ugly heads throughout the course of our lives.  There is, to be sure, a point in each of our lives at which we become cognizant of our actions and their moral implications, and we find ourselves faced with a choice:  to do right or to do wrong.  Unfortunately, 100% of the time, we pick the fruit off the Tree of Knowledge of Good and Evil.  In the eyes of God, we become sinners in need of redemption.

The story of Adam and Eve can also be viewed as the story of humanity itself.  Our personal experiences transitioning from a state of innocence to a state of rebellion can be extrapolated to the history of the human species.  As mankind evolved, our primitive ancestors lived in a state of relative innocence, unaware of their actions’ moral implications.  In the course of time, however, our capacity as a species to distinguish between good and evil arose and, as a result of our gradual transformation into a moral creature, the laws of God were written on the hearts of men (Rom 2:14-15).  Since then, humanity has been in constant rebellion against its Creator, and we forever will be this side of the grave.

In Tackett’s paradigm, however, to accept such propositions would be to admit that we are “goo-men.”  We are no better than the worms that I cut in half as a child, and no less worthy of a similar fate.  But man is different.  Tackett claims that man possesses unique qualities such as self-awareness, creativity, and moral consciousness.  I think this greatly exaggerates (and quite possibly oversimplifies) the uniqueness of humanity in relation to the rest of the animal kingdom.  Although I have not researched this particular aspect of man’s alleged uniqueness, I suspect that socio-biological literature is replete with examples of self-awareness, creativity, and moral consciousness in relatively advanced life forms other than human beings.  At the very least, I believe it is safe to say that we human beings possess the aforementioned characteristics to a much greater degree.  From a faith perspective, it could be argued that these characteristics evolved in our ancestors to such a degree that God saw fit to reveal Himself and fellowship with them and, by extension, us.

Tackett also brings up another aspect of humanity with which I am currently struggling to reconcile: the dualism of man.  Most Christians believe that man is either a tripartite being (body, soul, and spirit) or bipartite (body and soul/spirit, with the differentiation between the soul and spirit being nonexistent).  After coming to terms with the common descent of man from less complex life forms and accepting that the Bible reflects, in many areas, ancient scientific worldviews that are recognized today as inaccurate, I have begun to question the scientific accuracy of those portions of Scripture which teach the existence of man’s immortal soul, distinct from the flesh inherited from his or her parents, and given to each of us by God at the moment of our conception.  Lately, I have been leaning toward monism, a anthropological term that describes man’s nature as holistic.  (On my reading list is Joel B. Green’s book Body, Soul, and Human Life: The Nature of Humanity in the Bible.  If anyone has any other suggestions, feel free to comment.)  In this view, man does not possess separate, supernatural facets of his being that are distinct from his physical body.  I think there is much to commend the view that man does not actually possess a distinct spirit, yet can be granted eternal life by God on a conditional basis.  When our bio-physical “coil” dies, our “identity,” or kernel (1 Cor 15:37), is granted a bio-spiritual body prepared for life in the presence of God, a life that “flesh and blood” cannot inherit (1 Cor 15:50).

Once again, however, Tackett views the rejection of man’s tripartite or bipartite nature as a highway to hell.  To believe that man does not possess a supernatural and immortal soul is to fall for a “pernicious lie.”  Such a lie, he claims, is a “result of [accepting the findings of] science,” and trusting in science leads to things such as radical environmentalism, a greater suicide rate, and the acceptance of a philosophy that man is no more important than an insect.  What a gross over-generalization.  Tackett seems to having nothing better to do than to highlight the “worst of the worst”—a “minority majority” of sorts—to bolster his claims, and proceeds to lump all scientists and humanists into the same refuse pile.  Surely, there are many individuals who, when rejecting certain presuppositions, fall into the aforementioned philosophies and fates; but I can just as easily blame King James Only-style fundamentalism (a la Peter Ruckman) on one’s adoption of the doctrine of biblical inerrancy.  Falling victim to such philosophies is not a logical result of adopting monism.  Tackett also falsely claims that part and parcel of monism is the concept that humanity is basically good and that it promotes a philosophy of “self-actualization.”  What?!?!  Ever take any theology or philosophy courses in your doctoral studies, Mr. Tackett?

I believe that monism is what you bring to it.  If you bring to monism the belief that there is no possibility of an afterlife, then there is no afterlife in your monist worldview.  On the other hand, if you bring to monism the belief that God can grant that “kernel,” that part that makes you uniquely you, the gift of eternal life, then where is the danger in holding such a view?  The end result, whether it be Tackett’s tri-/bipartitism or Christian monism, is the same for the Christian believer.

Tackett then presents another false dichotomy for which his audience falls, to wit, that if man does not have a supernatural and immortal soul, then “man has no purpose, no meaning in life, no free will.”  This is patently untrue.  Those who are Christian monists do not seem to have any problems finding purpose and meaning in life, or freely choosing their course.  Tackett claims that our view of God and man is fundamental to how we live our lives.  I wholeheartedly agree.  Regardless of the reality underlying the debate, our personal worldview affects the outworking of our faith (or lack thereof).  But while Christian monists reject the existence of man’s immortal soul this side of the grave, they still live for Christ.  So is there truly danger in holding to Christian monism?  Even without belief in God, one can find purpose and meaning in life.  Purpose and meaning are generated by self-aware, moral creatures; they are not generated by the mere existence of a soul.  You sell yourself and the rest of humanity short, Mr. Tackett.  Consider this:  If there truly is no God, what are we to make of your sense of purpose, Mr. Tackett?  Is your sense of purpose in life merely illusory?  Of course not.

These discussions beg the question: Why do our differing theologies come to the exact same conclusions regarding man’s sinful nature and his need for redemption, and the existence of life after death in the presence of God?  Because they both recognize the current state of reality and the future promised state, even though the means differ by which we became sinners and by which we will become glorified.  Unfortunately, Tackett would never accept the possibility that a genuine Christian could accept (much less hold) such views.  I suspect that recognizing the true literary nature of Genesis 2-3 would implode Tackett’s worldview and drive him into severe depression and a false sense of purposelessness.  It is as simple as that.

I would ask Mr. Tackett this:  Why do you refuse to hold up dedicated Christians like myself as counter-examples, or “third ways,” to your false dichotomies?  Wait, don’t answer that.  I will answer it for you:  Because you can’t hold us up as alternatives for fear that recognizing our existence would destroy all for which you have worked in promoting your particular biblical worldview.

Now that I have trashed Tackett’s logic on several points, I will give him props on one particular point.  One of the questions that Tackett asks is “Why is there evil”?  Although he does not really address the origin of evil, he does catch secular humanists using flawed logic.  When atheistic materialists attempt to argue against the existence of God by appealing to the existence of evil, Tackett presses the question back on them.  Not only can they not answer their own question, the very question rings hollow, for their use of ethical language is not valid given that a godless cosmos is amoral.

Lastly, there are several conversational crumbs I wish to highlight:

18 Responses to Searching for Truth in “The Truth Project” — Lesson 3: Anthropology — Who Is Man?