Searching for Truth in “The Truth Project” — Lesson 4: Theology — Who Is God? 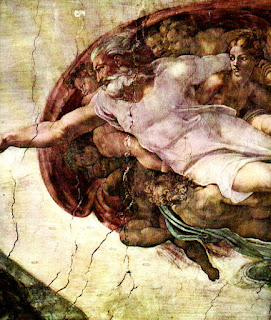 This will likely be one of the shortest installments in my “Searching for Truth in The Truth Project” series.  There is, I believe, much to commend this particular lesson; but that may be because the question Who is God? is less controversial within the wide swath of Christianity that exists.  Of course, there are finer points of debate, such as the “openness” of God and process theology, but I feel that those discussions are well outside the scope of this series.  I am, for the purposes of this post, comfortable thinking of God in traditional, biblical terms, which is not to say that my concept of how God works His will in the grand scheme of things hasn’t been affected by my move from young-earth creationism to evolutionary creationism.  It’s just that that particular part of my theological journey is much less settled than others.
I appreciate Del Tackett’s humility when it comes to the question asked in this lesson, for the answer to that question is virtually impossible to answer.  I would venture to say that Mr. Tackett would agree with me that, even with the Church’s possession of the Bible and our peek into the person of Jesus Christ through the eyes of His disciples, we’ll have to settle for “partial credit.”  Even if we were to spend time with Jesus face-to-face during His incarnation, we would still be at a loss as to who God really is.  While Jesus reflected the Father perfectly in some aspects of His nature, the very incarnational nature of Jesus’ earthly ministry kept other aspects of God’s nature hidden and shrouded in the mists.
After discussing the grandiosity of the answer, Tackett moves into a discussion about eternal life.  To be honest, I was expecting a discussion dealing with personal eschatology, and I was surprised that Tackett’s take on the answer was much more sophisticated than what usually passes muster in most Evangelical churches these days.  Eternal life, says Tackett, is something that is presently obtained by the establishment of a personal and transformational relationship with God through Jesus Christ, which only increases in intimacy upon passing from this life into the next.
My biggest issue with this particular lesson was the degree with which Tackett hangs his personal theology on the nature of inspired Scripture.  “Ninety percent of the work is done” if we accept (1) the existence, nature, and character of God as revealed in the Bible, and (2) the nature of the Bible as God’s inerrant and infallible written word.  Granted, for the Christian, the Bible is the only source of specific revelation we have about Jesus Christ, whom all true Christians accept as the incarnation of the infinite God in fallible flesh.  As I mentioned in an earlier post, I believe that the Gospel accounts of the person and ministry of Christ are historically reliable; at the same time, I don’t believe it is necessary that the Bible be an inerrant document in order to transmit historical truth.  It is on this very point—the nature of the Bible and the degree to which it is inspired—that Tackett’s worldview is most susceptible to crumbling.
For Tackett, the real battle over what constitutes a biblical worldview is found in the halls of academia.  In what is becoming a usual past time for Tackett, he presents his audience with a false dichotomy:  either the Bible is, in its entirety, perfect and without error, or it is completely unreliable and untrustworthy.  There is no mention of a gradient in between the two opposite conclusions (e.g., my own view of “biblical adequacy”).  There is only mention of the extreme liberal position represented by the infamous Jesus Seminar, which Tackett ridicules.  (While I appreciate and accept many of the advances made in the field of biblical criticism, I do believe the Jesus Seminar went too far in their attempt to reconstruct the so-called “historical Jesus.”)  Tackett also makes mention of the Documentary Hypothesis (commonly referred to as the JEDP Theory), which posits that the Pentateuch was compiled from as many as four separate sources and later compiled by a post-Exile redactor (or editor).  The belief in non-Mosaic authorship of the Torah, that the Bible “evolved over time,” is a hallmark of liberal theology and should be rejected outright, Tackett claims.  This is quite contrary to the research of Evangelicals like Peter Enns and Kenton Sparks, both of whom are quite comfortable with accepting, to a significant degree, many of the results of biblical criticism (see Enns’ Inspiration and Incarnation: Evangelicals and the Problem of the Old Testament

).  Is Tackett really willing to admit that the Books of Moses hadn’t undergone any redaction or editing throughout the centuries?  Even though the authorship of the Torah is attributed to Moses by Jesus himself, is Tackett really willing to claim that Moses wrote of his own death and burial (cf. Deuteronomy 34)?
That the absolute trustworthiness of Scripture (including places where it touches on science) is foundational to Tackett’s worldview is shown by his admission that alleged contradictions in Scripture (e.g., 2 Kings 1:17; 8:16; and 3:1) “threw [him] into a terrible crisis.”  Without resolution, Tackett says, his entire Christian experience would be thrown into doubt and would very likely result in atheism.  Thankfully, Edwin Thiele came to Tackett’s rescue and, through The Mysterious Numbers of the Hebrew Kings

and its research regarding differing reign-calculation methods between Judah and Israel, cleared up the apparent contradiction, making right what Tackett feared was wrong.  With Thiele’s scholarship in his back pocket, Tackett sighs with relief, “You can trust the Scriptures.”  No, Mr. Tackett, you can trust the historians who recorded the reigns of the Hebrew kings, just like you can trust secular historians to give you the dates during which Abraham Lincoln occupied the office of the President of the United States.  (This also begs the question whether Thiele’s work is without error.)  And while you can trust that particular portion of 1 Kings, why do you feel that the accuracy of one particular aspect of 1 Kings automatically transfers to the remainder of Scripture?  Moreover, just because one alleged contradiction is resolved doesn’t mean that the resolution constitutes proof of a passage’s inspiration, only its inerrancy.  Even the concept of inerrancy runs into a problem:  a phone book can be free of error, but such a quality says nothing about whether it was God-inspired.  There is danger in Tackett’s line of logic, for the removal of just one card could very well result in the collapse of the entire house.  I find it sad and unfortunate that his worldview is so dependent upon a particular view of Scripture and not on the transforming faith experience he has undoubtedly undergone.
I don’t intend to debate here the finer points of biblical criticism, the nature of Scripture, or the degree to which it was inspired.  What I do want to make clear is this:  Tackett is not giving his audience the full picture and proceeds to restrict the Christian faith to an extremely narrow intellectual path, one fraught with dangerous obstacles and traps of human construction.  In doing so, he diverts the traveler from exploring safer routes that lead to the very truth he so desperately desires to possess.  Once again, Tackett fails to illuminate his audience by providing examples of dedicated Christ-followers in the Evangelical community who disagree with him.  Where’s the truth in that?

5 Responses to Searching for Truth in “The Truth Project” — Lesson 4: Theology — Who Is God?