“Beyond Creation Science” Is Here! 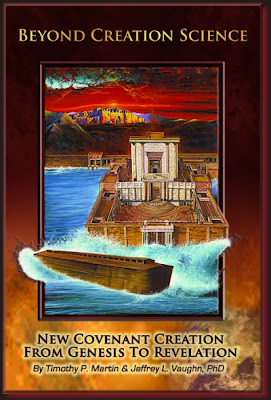 I spent the last week in Monterey, CA, scoping out the city in advance of our imminent move next month so that I can attend the Army’s Defense Language Institute for a year-long language training program in Farsi (Persian). It was agonizing in one respect: a special package was to arrive during my absence. Not being able to open that package right away and view the contents was like a kid going to bed the night before Christmas, wondering what part of his wish list he could line out in the morning. Inside the case were 24 copies of a book with which I was already intimately familiar. So why would it be agonizing? Because it marks the publication and release of the first major piece of literature that suffered the wrath of my “red pen.” Authors Timothy Martin and Dr. Jeffrey Vaughn not only solicited my thoughts on the content, but they were also gracious enough to let me wreak havoc on the manuscript. Some may think editing a manuscript would be a tedious task, and in some cases that is entirely true. In others, of which Beyond Creation Science: New Covenant Creation from Genesis to Revelation is a prime example, it was a pleasure to edit. Because the information contained in this volume assisted greatly in my ultimate break from Young-Earth Creationism, it wasn’t just a job … it was an adventure! :::cue cool Kenny Loggins Top Gun music::: What’s unique about this particular book is how it ties the creation debate with the “end times” debate. Although the authors and I don’t agree fully on the origins question (both are Old-Earth Creationists, whereas I’m an Evolutionary Creationist), or on the correct interpretation of the early chapters of Genesis, we both agree that OECs (or even ECs/TEs for that matter) who still hold to a futurist eschatology have failed to examine the major (theo)logical disparity between their view of beginnings and their view of the end. It is the addressing of this disparity that proves to be the strength of Beyond Creation Science. If you, as a reader of this blog, have already made that agonizing paradigm shift from YEC to OEC or TE/EC, yet still look to a future “new heavens and new earth,” then I highly recommend this book to you, along with Brian Martin’s Behind the Veil of Moses, the second edition of which I am currently editing. Beyond Creation Science is available for purchase right now from http://www.beyondcreationscience.com! What are you waiting for? (Or is that, “For what are you waiting?”) 😉

5 Responses to “Beyond Creation Science” Is Here!